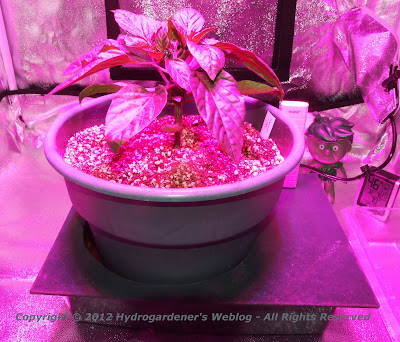 At this point I am going to consider my homebuilt AutoPot project a success, even though I still have to cut down the two covers that fit different size pots to fit the smaller reservoir tray.

To date I have removed at least six small buds from the Giant Marconi pepper plant, however, from this point on I am going to let the plant flower. If the plant can not support fruit, it will abort the flowers itself. Mother Nature knows best.

A week ago I placed the time lapse camera in the tent to record the growth of this plant, however when aiming the camera I accidentally cut the top of the plant from the frame. At some point I will have to repeat that experiment, as when I viewed the video the leaves on the plant appeared to be flapping like bird wings. The camera was set to take three frames every fifteen minutes, and for the life of me I can not imagine why the plant appeared to droop and recover. The temperature is pretty constant, as are the light and moisture levels, so that really has me baffled.
Posted by Jack at 1:35 PM No comments: 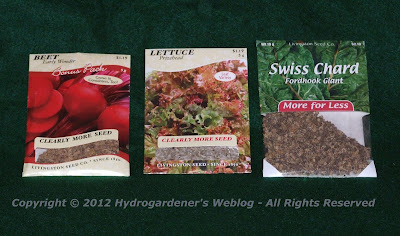 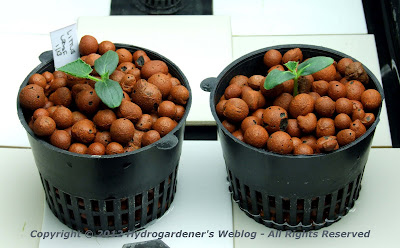 Sunday I stopped by the local Agway to pick up some perlite, and they had just put out this year's shipment of seeds. Not that I needed seeds, but I bought up some anyway.

Livingston Seed Company is not associated with Monsanto, which is one of the reasons I like to buy their seeds. Of course, the other reason is that you get a lot of seeds for a reasonable price. The lettuce has 3 grams, the beets have 5 grams and the chard has 10 grams, so for under five dollars I got several thousand seeds. And, considering that I waste very few seeds, that is a bargain indeed!

The nutrients for the cucumbers will be the standard mix I use for lettuce, with the EC adjusted to 1.6 and the pH at 5.6. 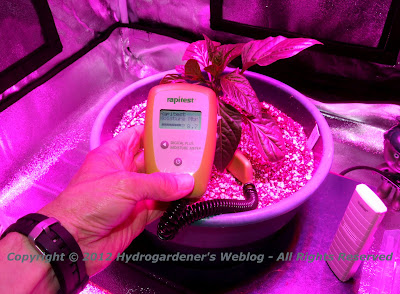 As much as I like using AutoPots the recent episode with the cucumbers has convinced me that they do have a tendency to overwater.

The problem is more evident when growing indoors, where the rate of growth and transpiration is much slower than in the greenhouse.

I thought that installing cut off valves on the feed lines, before the smart valve, would solve the problem, but the question was: how wet was the media at the bottom of the pot?

Today I purchased a Rapitest digital moisture meter at a local garden shop and I am quite impressed with the performance. The programmed plants are all house plants, so they are of little use to me, however, by using the basic setting and inserting the probe 2/3 of the way into the container I can get an accurate reference on how moist the media is.

After testing the tomatoes and peppers I found the readings to be in the 8 and 9 range on a scale of 10, so I have turned off the feed to the smart valves.

My thinking is to monitor the levels and turn the valves on when the reading is 3 or 4. Over time I can determine how the plants respond, and the best level for each variety.

When using the meter I simply select the basic setting, insert the probe and read the scale. The probe is cleaned on a paper towel before being inserted into the next plant. That simple.

I suspect that this tool will be well worth the twenty dollars it cost me. 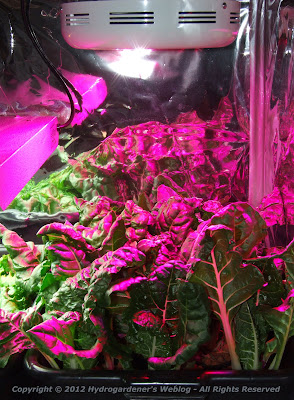 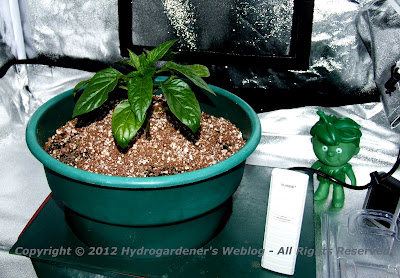 Today I began soaking seeds for Early Wonder beets, as the chard in the photo is just about ready to harvest. At the market today chard and beet greens were being sold for $2.49 per bunch. It seems a decent price, except, the size of the "bunch" was so small you need a bunch for each individual serving. It is well worth the effort to grow either of these greens.

The chard grew exceptionally well under the LED, so I will dedicate the light and system to chard and beets.

Not to belabor the subject of LEDs, however, the Giant Marconi pepper plant being grown under the six band flower series LED is producing buds already. It is five weeks from the time I started the seeds, and we all know how long it takes just for a pepper seed to germinate.

This is really the first actual test of my revised homebuilt AutoPot, and so far it is working perfectly. I will remove the first four or five buds to allow the plant to put its energy into growing before I allow any flowers to form. So far, so good, but what can possible go wrong, as Ava has Sprout keeping an eye on things. 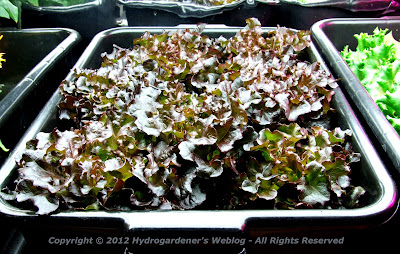 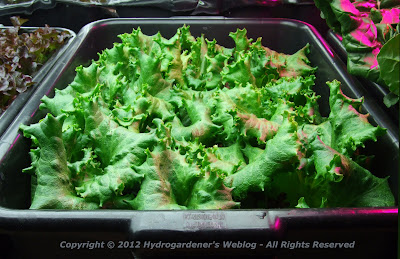 The two ebb and flow systems above are just about ready to harvest, so it is time to think about what varieties to plant next.
The top photo shows Red Salad Bowl lettuce and the bottom photo is Two Star lettuce. In my opinion the Two Star looks remarkably like Lettony lettuce. Both of these varieties are good candidates for hydroponic growing, as there was absolutely no sign of tip burn in either system.
Yesterday I contacted the AutoPot, or Easy 2 Grow, folks regarding my problems with cucumbers, and their CEO was kind enough to respond with several suggestions regarding growing cucumbers with their system. He wrote that, as one person suggested, using a pad under the pot was not necessary. The crux of his advice was to allow the plants to grow larger and develop a decent root system before placing them into the AutoPots, and, to allow them to be well established before turning on the liquid; perhaps as long as three or four weeks.

My one remaining plant, the one with the two small cucumbers, is looking slightly better. It may be my imagination, but it appears to be growing again, however, one way or another its days are numbered. 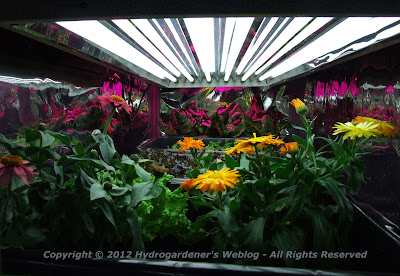 Things are pretty well under control and there is not much going on today , so I thought I would post a photo of the grow chamber so I would have it to look back on for reference.

In this small space I have calendula, zinnia, Australian leaf lettuce, red salad bowl lettuce, two star lettuce and chard.
It is too bad that I did not build a grow chamber earlier in my hydroponic endeavors. I most likely would not have built one at all if my wife did not keep insisting that I do so. Well, everyone knows women are much smarter than men.
Posted by Jack at 12:40 PM 2 comments: 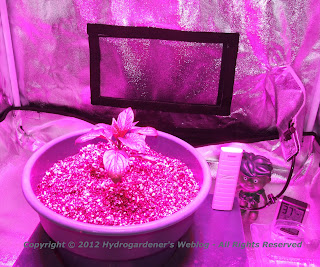 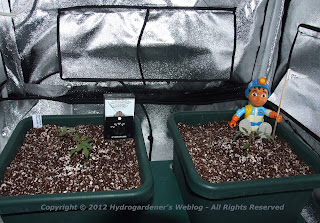 The Giant Marconi pepper plant apparently likes the growing conditions in the tent, as it is doing very well indeed.

Today, for another experiment, I planted two Mountain Princess seedlings in the second tent. My intent is to limit the number of trusses to one, or two, per plant. I am trying to direct all of the plant's energy into producing a few large fruit, rather than a lot of fruit. It should also be interesting to see if the tomatoes mature and ripen in less time than usual.

It is sad to say, but the cucumbers have virtually ground to halt, so I replaced one planting of cucumbers with another Giant Marconi pepper. I still have one cucumber plant that is growing very very slowly. The plant looks fine, has two small cucumbers, however, it does not appear to be growing at all. I checked the roots on the plants that were replaced, and they were pure white with no sign of disease, so, at this point, I have no idea of what is going on with the cucumbers.

I am also planning on using the same nutrients that I use for lettuce and chard for the cucumbers rather than the Peters Professional. 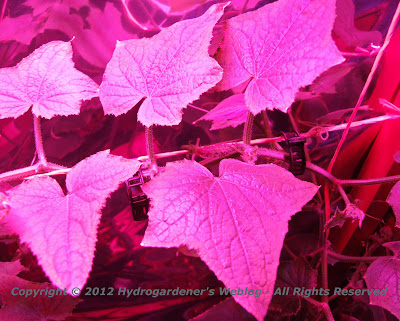 George Van Patten, in his book Gardening Indoors with Soil & Hydroponics, says to remove the side or lateral shoots from cucumber plants to send nutrients to the remaining fruit. In my case, I have as many, if not more, fruit developing on lateral shoots than on the main stem.

Being parthenocarpic, the plants have no need of male flowers, so I removed the male flowers to redirect energy back into the plants.

Further, to keep the plants somewhat under control, I remove the growing tip of lateral shoots that have produced a female flower, and I am removing tendrils as they develop.

Growing cucumbers hydroponically indoors is a challenging proposition, to say the least. Nutrient needs change as the plants grow; as there are no nutrients in the media, the grower needs to recognize, and compensate for, any deficiencies, quickly. 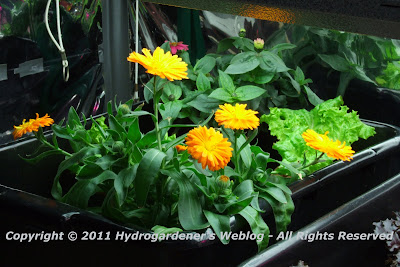 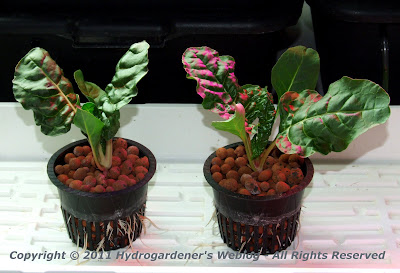 Ava is picking our flowers, and presenting them to her mom and grandmother, just as quickly as they open. And, that is fine with me, as there is no sense in keeping them in the grow chamber where they can't be seen and enjoyed.

At this time I am growing several varieties of lettuce to evaluate how they grow, hydroponically, under my specific conditions. I have found that, in addition to being difficult to start, Australian yellow leaf lettuce has a wicked tendency toward tip burn. On the other hand, I have found a variety called Two Star, that is really doing quite well without a sign of tip burn.

The Fordhook giant chard, show in the lower photo, appears that it may turn out to be the very best batch of chard I have every grown, and, I have grown some great chard in the past. These plants are only four weeks from the date that I started the seeds, and they are the most compact chard seedlings I have ever grown, including in the greenhouse.

The Little Leaf cucumbers growning under the red/blue/white LEDs are finally producing female flowers. The EC has been adjusted to 2.4 with a pH of 5.8.
Posted by Jack at 3:53 PM 2 comments: 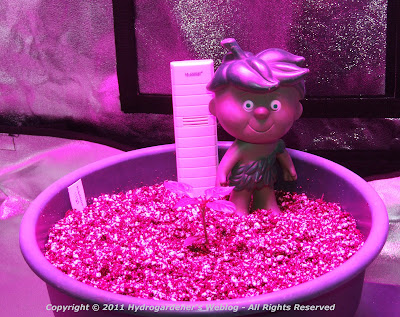 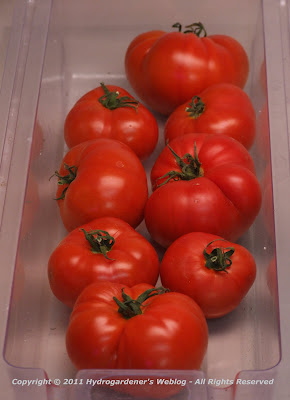 We are having an unusually mild winter so far, however, it is like waiting for the other shoe to fall, as I am sure it will not last. This afternoon, the temperature was 51 degrees F outdoors, and in the greenhouse the temperature was in the mid seventies.

The Giant Marconi seedling was ready to be transplanted and the perlite was in the greenhouse, so I mixed the media and performed the transplant in the greenhouse. It is amazing what a few hours of warm temperatures and bright sunshine did for my disposition.
The pepper seedling was planted in my homebuilt autopot, which was placed in the second tent, and I will be using a six band flower series 126 watt LED with a photoperiod of 14 hours. The light is positioned 14 inches above the plant, and at the plant level I recorded a reading in excess of 5,000 footcandles.

I have decided that going forward I will use EC as a unit of measurement for nutrients, rather than TDS, as EC is supposed to be more accurate. As I want to use a single reservoir to feed both the tomatoes and peppers, I chose an EC that will work for both, 2.7.

The bottom photo shows part of the harvest from the Balcony Hybrid tomato grow, so I will call that project a success. I am sure that there are still people who will say that LED lighting does not work, no matter how many examples like this they see. Then again, there are people who still doubt the Lunar landings.