Winters in upstate New York tend to be pretty dismal, so I was casting around looking for a fragrant flower to grow hydroponically to dispel some of the winter gloom.  I was looking for something that did not take up a lot of space and would grow well hydroponically.

In my seed cache, I came across a packet of Dwarf Fragrance mix carnations from Ed Hume Seeds that I purchased years ago.  I started some seeds in a used coffee container to grow deep water culture with a wick.  I found that the container was just the right diameter to support a 3" net pot.  The media is in the 3" net pot and consists of 80% agricultural perlite,  a thin layer of coco coir holding the seeds and a thin layer of activated charcoal covering the coir.  For nutrients, I am using the same mix and strength that I use for basil, except, I have been adding .5 ml of a potent phosphate to promote flowering.

As the plants grew it was necessary to add a few skewers to support the plants as they tend to be top heavy.  My objective is to grow flowers, not to win an award for the most attractive plant.

As I recall I tried to grow these same seeds in the greenhouse but abandoned the idea because the plant was a magnet for spider mites.

In the meantime, I have purchased seeds for a similar variety that only grows to a height of six to eight inches, which would be ideal if the flowers are not tiny also.

The plants are easy to grow and take up hardly any space so I will be growing a lot more canned carnations this winter season.

P.S. The flowers are opening and they smell fantastic!  I am going to start another batch to keep the supply going. 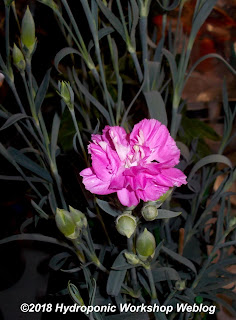 Posted by Jack Bulmer at 8:53 PM No comments: 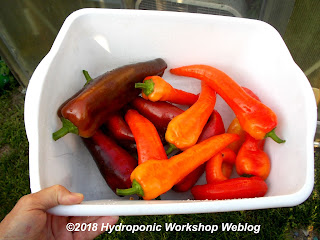 We are picking a lot of sweet peppers both from the greenhouse and garden.  And, for whatever reason this season we have picked more tomatoes than ever before.

That said, the recent bouts of heavy rain have caused some of the tomatoes to split in the last week or so. 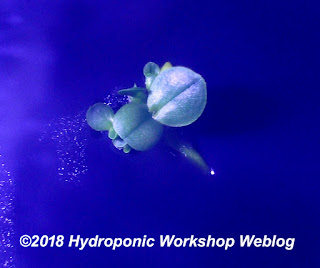 The Phalaenopsis seed project is humming along nicely.  Translate that: I have nothing to do but watch them grow.

What I thought were single large corms and planted individually are turning out to be multiple corms fused together.  So, at some point in time, it will be necessary to separate the seedlings into individual plants.  That, however, is some ways off in the future. 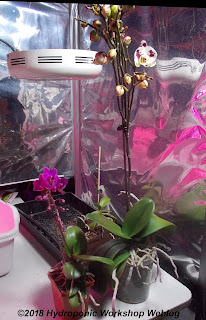 Posted by Jack Bulmer at 7:02 PM No comments: 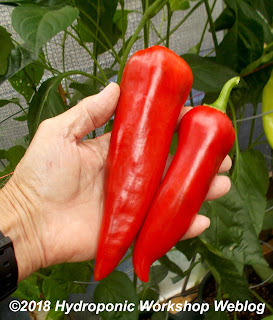 Someone and I do not recall who gave me seeds for Kapia Hungarian peppers last season.   There were only a few seeds in the packet so I did not have many to plant, perhaps six or so.

Two plants were placed in the greenhouse and the remaining plants in the garden.  The greenhouse plants have ripe peppers and they are real beauties!

The seeds will be saved and next season I plan on planting just these peppers.  Yeah, they are that good.

"The Red Kapia is a small, tapered pepper with a brilliant lipstick-red color.

In the same family as the bell pepper, this mild 4-5 inch pepper has a distinctive sweetness. This pepper is a native of Eastern Europe and, in fact, the main flavor ingredient in Hungarian Paprika. It’s a great addition to salad, roasted or simply tossed in a quality olive oil with pasta."