One of my favorite side dishes is young tender beet greens, but my wife can never find them in the markets, so I am growing my own.

My greens are being grown hydroponically under a 150 watt multi spectrum LED grow light in an ebb and flow system.

For nutrients I am using an off the shelf basic dry nutrient from Wal-Mart, some calcium nitrate and Epsom salt.

The video is about two and a half days growth and illustrates the rate of growth using hydroponics.

You tend to think of plants as being static, but when seen in time lapse it is evident that they are rarely still.

Posted by Jack Bulmer at 4:54 PM No comments:

With sun rising higher in the sky and the night temperatures not so severe, I have begun thinking about returning the olive trees to the greenhouse to make room for seed starting.

Heating the greenhouse at night has always been an issue in early spring and fall; previously I have relied on electric heaters controlled by a timer.  The timer was set from nine in the evening to nine in the morning regardless of the temperature.

Controlling the thermostat on the heater was another major issue, as I could never get the heaters to behave quite as I would have liked them to.

This device may provide a solution to the problem, it is called a Thermo cube and automatically turns the electricity on and off according to the temperature.  My device was purchased through eBay, but they are available from other vendors in the $12 to $15 dollar range. 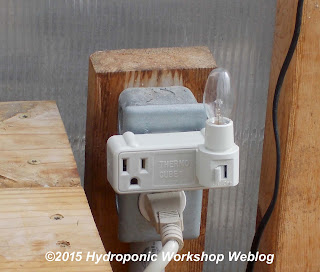 To test the device I placed a small night light in one of the sockets and placed it in the greenhouse today. 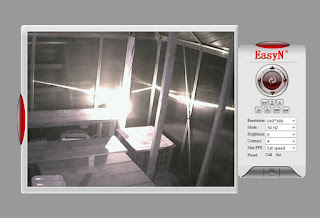 To monitor the device I used my remote indoor thermometer and the IP camera in the greenhouse.  Sure enough, when the thermometer hit 35.2 degrees F, the light went on!

It is so nice when something works exactly as they claim it would, and I expect to reclaim the cost of the device in energy savings.
Posted by Jack Bulmer at 8:27 PM No comments: 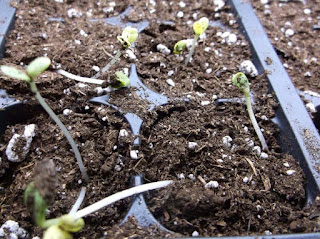 Someone posted the above photo on a gardening forum I belong to asking: "what is wrong with my seedlings?"  Well, you don't have to be Einstein to answer that question.

The same questions pop up each year as people try to start seeds indoors, with leggy seedlings being at the top of the list.

They worry about having just the right soil mix, temperature and what to feed the seedlings, while overlooking the most important requirement: light.

Many gardeners use basic 4 foot shop lights for seed starting, which work to some degree.  That being said, if you are really serious about giving your seedlings a good start T5 grow lights four or five inches above your seedlings will make a world of difference. 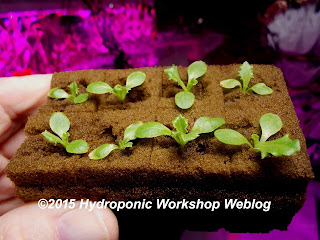 In my reply I wrote that the problem with the seedlings was inadequate light.  Given adequate light, seedlings will look exactly as they would if they were started outdoors in sunlight. 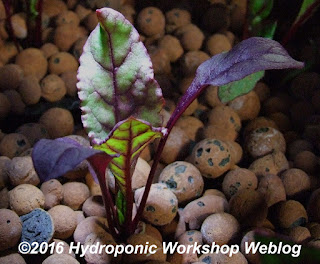 For plants, the duration, intensity and spectrum of the light they receive is crucial to their development.
Posted by Jack Bulmer at 8:31 PM No comments: 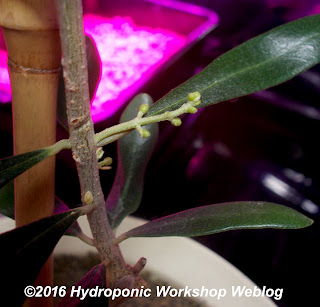 The above photo shows buds forming on a Callitier olive clone.  This cutting was only taken in December 2014, so flowering on such an immature plant such as this is unusual.  As this is the second immature plant to set flower buds, I am thinking that the red LED spectrum may be responsible for the early budding.

In this case though, the parent plant is also budding, not like the Ascolano cutting where the cutting is budding but the parent is not. 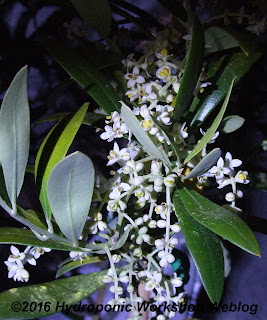 Meanwhile, some of the olive trees in the grow tents are in full bloom.  Using an artist's brush I tap the flowers to get the pollen airborne, while a small fan at the bottom of the tent circulates the pollen within the tent to hopefully pollinate the trees as nature does outdoors.
Posted by Jack Bulmer at 8:43 PM No comments:


Today I set up and tested a flood and drain system for a growing project.  It has been sometime since I have used these systems, so I had to do a complete setup and test.

The grid and screen on the bottom are intended to prevent the roots from laying in standing water.  The grid is from Home Depot, and is used to defuse lighting.  It is inexpensive and can easily be cut to size. 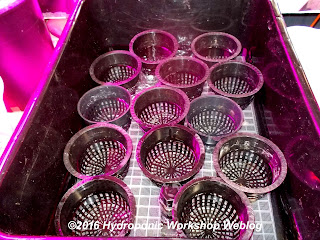 The beet green seedlings had grown to the perfect size for planting, so I decided to plant them before they got much larger. 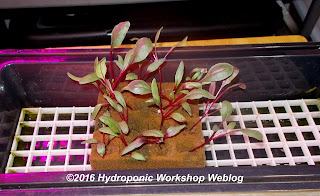 For beet greens and chard I like to use a flood and drain system and plant in 4" net pots.  When placing the seedling in the pot, I cover as much as the stem as possible to provide support and stabilize the seedling.  Also, I moisten the expanded clay pellets prior to using them to prevent them from wicking moisture from the horticubes. 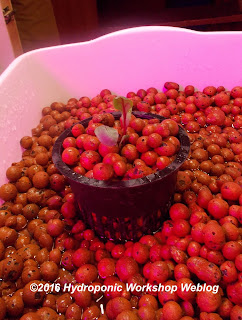 The photo below shows a seedling after being placed in the system.  As you can see I have buried as much of the stem as possible to provide support to the tiny seedling. 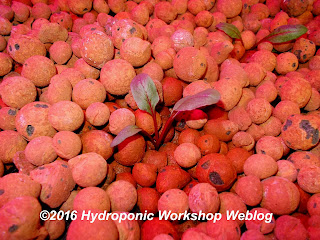 When I placed the plants into the flood and drain system, I filled all of the space around the pots with expanded clay pellets.  The photo below shows the system while being flooded.  The extra layers of pellets keep the top dry, which prevents algae from forming, thus eliminating the possibility of fungus gnats. 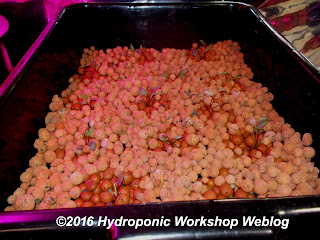 The greens will be grown under a multi spectrum LED grow light with a photoperiod 14 hours.  The pump cycle for the nutrients will be fifteen minutes on every four hours. 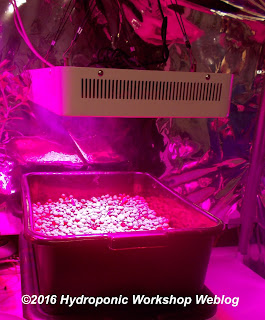 Posted by Jack Bulmer at 4:13 PM No comments: 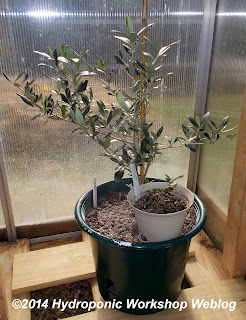 In September of 2014 a cutting was struck from the Ascolano olive tree, this turned out to be the very first olive cutting that I had taken that actually rooted.  The photo above shows the mother plant and the cutting in 2014.  At that time I named the little plant El Primo, Italian for first, as it is an Italian variety and it was my first successful cutting. 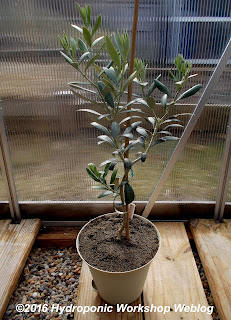 The above photo, taken this morning, shows El Primo 17 months after being struck.  While examining the plants this morning I was absolutely dumbfounded to see flower buds forming on the cutting. 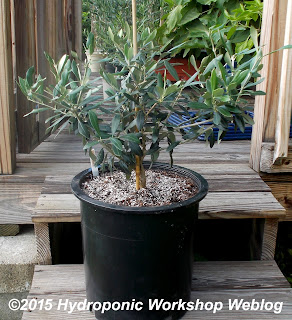 The mother plant, also shown above, is one of my most developed plants, yet it has never flowered.

It is a mystery to me why the cutting would flower while the parent did not, considering that they are growing side by side,  under the same growing conditions in the same soil mixture.

Go figure.
Posted by Jack Bulmer at 3:51 PM No comments: 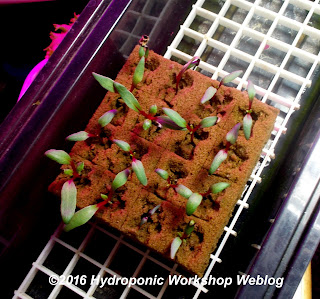 My wife got me going on beet greens when she made the remark at dinner that she never sees beet greens for sale at the grocer's.   We both love beet greens, so I have started seeds for a small batch which I intend to grow in an ebb and flow system under the LED grow lights. 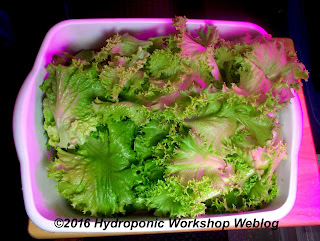 In order to make room for the beet greens I picked all of the gentilina lettuce this morning.  It makes me wonder if anyone else in New York is picking fresh lettuce on Groundhog's Day.

Another thing I am wondering about is if turning on the flowering spectrum of the large LED grow light is responsible for the number of olive varieties that are now budding.

Being early producers the arbequina and koroneiki trees have flowered before, now however, in addition to those two, the picholine, chemlali, leccino and empeltre are also beginning to flower.  Other varieties under different lighting are not budding, so it does make one wonder.