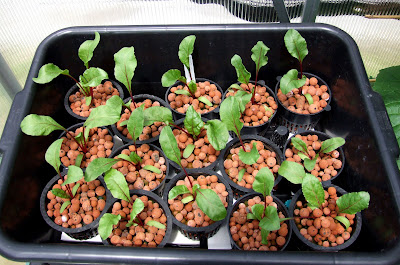 After a week in the ebb and flow system the beets are progressing nicely. With tall upright plants like beets and chard I place the grow cube directly on the bottom of the net pot, and fill the pot with hydroton. This method of planting provides adequate support for the plants.


The first batch of swiss chard was enough to provide a veggie serving for four meals. If you have never eaten chard; it has an earthy taste which is slightly stronger than spinach. If you learn to like the taste, then you're onto a winner, because chard is one of the most nutritious vegetables around. My wife prepares chard by par-boiling the leaves and stalks, adding the chard to tomatoes with garlic and olive oil, and simmering until tender. If you would like the recipe just drop me an email, or leave a comment with your email address.

I have planted another batch of rhubarb chard in an ebb and flow system, and I have started seeds for a batch of yellow decorticated chard for a third system.

It still seems incongruous to be growing beets and chard along with warm weather crops like peppers, cucumbers and tomatoes. Most likely controlling the temperature of the greenhouse with the liberal use of the shading cloth is a contributing factor in my success to date. 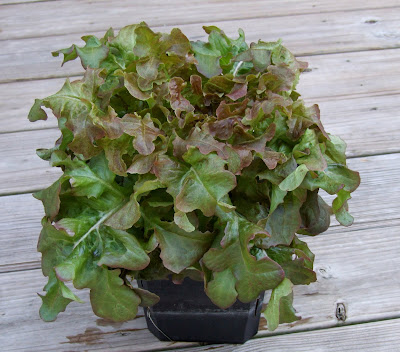 Today I harvested a nice batch of Oscarde lettuce that has been growing in the greenhouse in a DWC system. Oscarde is described as follows:


I have been expecting the plants to bolt to seed as the seed catalog stated they would, however these plants showed no sign of bolting. That may be because I have been using the shade cloth everyday the sun is shining to keep the temperature from getting too high. That most likely accounts for the plants not being deep red in color, as it has been my experience that high light levels are needed to bring on the deeper colors.

The Oscarde has been replaced in the DWC system with Physalis, or Groundcherry, which I planted from seeds obtained from fruit my wife purchased in the fall at a farmer's market.

Physalis (pronounced /ˈfaɪsəlɪs/)[1] is a genus of plants in the nightshade family (Solanaceae), native to warm temperate and subtropical regions throughout the world. The genus is characterised by the small orangey fruit similar in size, shape and structure to a small tomato, but partly or fully enclosed in a large papery husk derived from the calyx. Many Physalis species are called Groundcherries. One name for Physalis peruviana is Cape Gooseberry, not to be confused with the vast majority of gooseberries, which are of the genus Ribes.

The typical Physalis fruit is similar to a firm tomato (in texture), and like strawberries or other fruit in flavor; they have a mild, refreshing acidity. The flavor of the Cape Gooseberry (P. peruviana) is a unique tomato/pineapple-like blend. Physalis fruit have around 53 kcal for 100 grams[2] , and are rich in cryptoxanthin.

Its uses are similar to the common tomato or to fruits with a refreshing taste. Once extracted from its husk, it may be eaten raw or used in salads, desserts, as a flavoring, and in jams and jellies. They can also be dried and eaten much like figs, apricots or grapes.

As this plant is native to subtropical regions I expect that it will thrive in the greenhouse in the DWC system. Time will tell..... 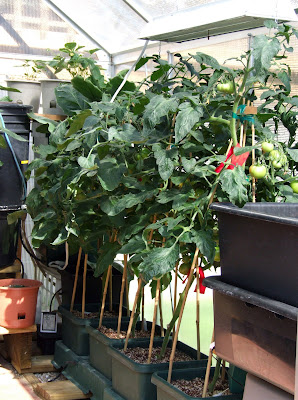 So far I am happy with my choice of the bush beefsteak variety to grow hydroponically in the greenhouse.

I was beginning to wonder if they would ever get out of the flowering stage and begin setting fruit. The plants had only flowers for several weeks, and even though I misted and tapped the trusses, they just would not set fruit.

Here I am with a bush beefsteak. What the heck am I supposed to do with that?

At last I decided that I had enough flowers, and if they all eventually set there would be plenty of tomatoes. So I pinched off the growing tips two leafs beyond the last truss. Now the plants are setting fruit from top to bottom. There are still a few open flowers, however, there are plenty of tomatoes forming.

I am growing four plants in Autopots, and they are slurping up a gallon of nutrients a day. Presently I am using a TDS of about 2800 with a pH of 6.5 or so.


I had hoped to have tomatoes by the first of July, but it does not look like that is going to be the case this year. In any event, I expect that there will be plenty of tomatoes.

In mid-March I started Best Boy, Black Cherry and Glory Hybrid plants for the soil garden. They were grown hydroponically in coco coir and perlite and planted in the garden in on May 14, 2009. I noticed that the plants stressed for several days when the sun was shining on them. I misted them several times in the afternoon, and they bounced back quickly. Now, the root systems have developed and they are growing quickly. Each time I empty a hydroponic system I pour the used nutrients on the tomatoes. As I usually only go two weeks between changes, there are plenty of nutrients remaining for the garden plants to absorb.

Today I planted a drip ring system with Large Cherry, and two self watering pots with Tiny Tim tomatoes. I intend to bring these plants inside at the end of the growing season to grow under lights. Plan ahead.... 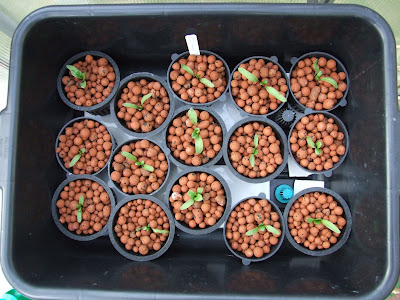 I am going to attempt to grow beets in an ebb and flow system, however, they will be harvested long before they mature. We like beet greens much more than we like full grown beets.

To start this batch I am using the nutrients I purchased from Vertigro using 3 ounces of nutrients in 7 gallons of water. The TDS measured about 1200 and the pH was 6.0 exactly.

It always amazes me how quickly seedlings grow after they have been transplanted into one of these systems. I will post another photo in a week or so for comparison. 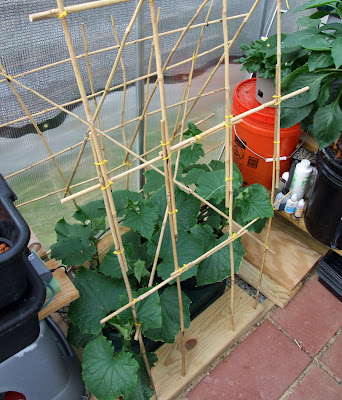 It seems that cucumbers seem to languish awhile after they are first planted not doing much of anything. While they appear to be languishing, they are really developing their root system getting prepared to burst into rapid growth.

My cucumbers were sending out tendrils looking for something to climb, so I thought I had better get something in place quickly. I finally thought of a way to fasten a bolt eye in the aluminum channels that support the roof panels, and that little modification allowed for a more elaborate support rather than the simple trellis I used last year.

I can't decide whether my project looks more like a section of the bridge over the river Kwai, or a jungle gym for cucumbers. In any event, the plant seems to like it, as within a matter of hours the tendrils were winding themselves happily around the bamboo canes.

Hopefully the plant will confine itself to the support, rather than climbing anything and everything within its grasp.
Posted by Jack at 9:40 PM No comments: