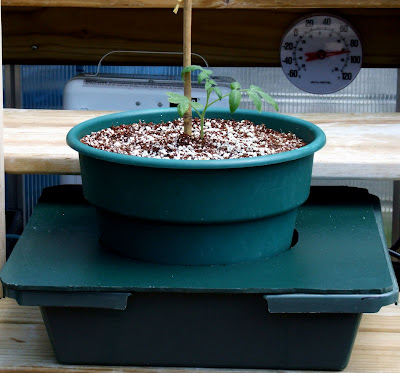 A Rutgers tomato seedling is being used to test my version of the autopot, however, I doubt that there is enough time left in this growing season to produce fruit of any size. Still, just as with the test of the Tropic seedling, I hope to evaluate the appearance the tomatoes formed by the first truss.

Rutgers is not one of the varieties recommended by any of the books I have on greenhouse growing, but I am more interested in how the pot design performs than producing tomatoes. If I happen to get any tomatoes as a result of the trial, so much the better.

My objective is to grow larger fruit than I have grown in previous years. And, to this end, I have repositioned the pots so that the plants will receive the maximum amount light and not be shaded by other plants.

This week I purchased a package of ten seeds for a cultivar named Trust, which is supposed to be the ultimate greenhouse variety. It is hard to understand why the seeds cost over a dollar each. I wonder if they transport the seeds by armoured truck when they are shipped to the vendor.

My plan for next season is to grow the Trust, Tropic and Burpee's Super Beefsteak, which is just an off the shelf variety from Wal-Mart. It should be interesting to see if these greenhouse cultivars are really superior to the more common varieties. 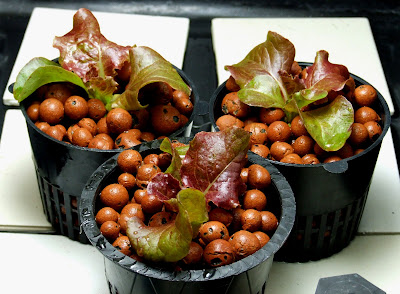 "The red pigment in red leaf lettuce contains small amounts of fairly strong antioxidants. Eating red leaf lettuce is a delicious way to get lots of vitamins A and K, plus the anti-oxidants beta carotene and lutein." Quote courtesy nutrition.about.com

With that statement in mind I purchased seeds for the lettuce in the above photo in an organic gardening store in upstate New York. Outredegeous, what a clever name they selected for this cultivar! The following description is from the seed company:

Outredgeous Lettuce
75 days. One of the reddest romaines on the market, Outredgeous is a wonderful, stout-growing variety that can be harvested either as a baby lettuce or allowed to mature as a 10 inch romaine. The thick, glossy, slightly ruffled leaves are bright red on top and green on the underside. Serve as a head with its sweet crispy heart lightly kissed with a seasoned olive oil. If you are a market grower, this lettuce is best banded for market sales. Selected by Frank Morton, Gathering Together Farm.

Since I began growing lettuce I have tended to prefer the red varieties, so it is nice to know that they are a healthier choice. 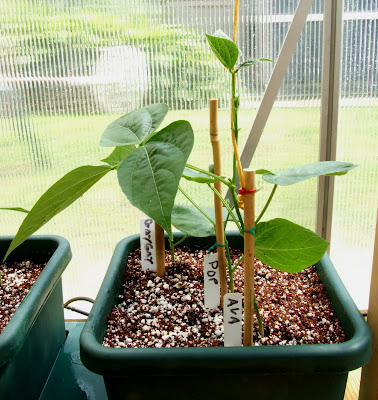 " Alexander Pope in 1732: "'Tis Education forms the common mind, Just as the Twig is bent the Tree's inclined"

Our three year old granddaughter, Ava, has been extremely interested in plants and the greenhouse since she first started to become aware of her surroundings. To encourage her interest I let her help me plant seeds, water, pick flowers and vegetables and pretty much whatever else I am doing. Yesterday, she was in the greenhouse happily removing the male flowers from the cucumber plants. Fortunately, at this point, there are only male flowers on the plants.

Ava is particularly excited about the great race pictured above. Ava, her grandmother, and I, have each planted a Kentucky Blue pole bean seed, and the race is on to see which one of our plants will reach the top of the support first. And, we all know who the winner will be.

Hopefully, activities like this will help in cultivating an interest in nature that Ava will carry into adulthood.
Posted by Jack at 4:48 PM No comments:

It has been a very hot summer, so far 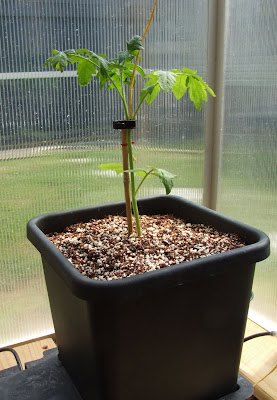 June was the warmest June on record worldwide, and so far July, in our area, has been very hot.

Naturally, the heat would have an effect on growing plants. The local produce growers are picking corn, tomatoes and cucumbers well ahead of their normal harvest times.

The cucumbers seemed to manage just fine, however, the tomatoes and peppers were just not up to par. The size of the fruit on my tomatoes and peppers has been smaller than normal. I am not sure but it may be due to the unusual temperate conditions, as that is the only difference this year.

We thought the MoneyMaker tomatoes were much to acidic, so I will be changing varieties for next year . Trust is one variety I would like to grow, but so far I have not been able to locate a decent price for seeds. One of the books I have on hydroponic greenhouse production of tomatoes recommended Tropic as the first choice for hobby greenhouses. I did manage to locate a good price on seeds for this variety from Southern Exposure Seed Exchange. I purchased 1.5 grams of seeds for a little over five dollars, and the shipping cost was very reasonable. Other vendors were charging the same amount, or more, for 10 seeds.

The plant pictured above is a Tropic that I have started as a trial. I am not sure that there will be enough time this season for this plant to produce fruit, but I felt that I could at least get an idea of how it will perform from watching the first trusses form.

Below is a description of Tropic from the seed supplier:

This variety developed by the Univ. of Florida is almost certain to grow in almost any climate. Very disease resistant, 9 oz. red fruit (with some green shoulders) is thick-walled and is excellent choice for garden or greenhouse production. Highly recommended for those areas that are hot and humid and prone to disease. Great sweet tomatoey flavors. 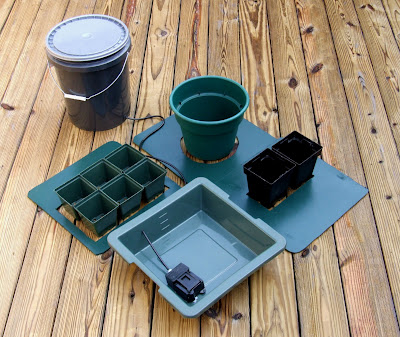 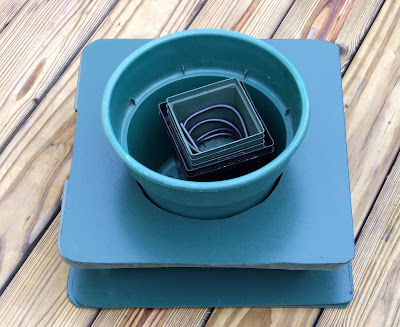 I really like the AutoPot concept, however, I thought I could build my own system and make it more flexible than what they are marketing.

To begin the process I needed to purchase an additional smart valve, and that turned out to be the most difficult part of the process. Finally, I located a dealer in Texas who would sell just the valve. I purchased the valve for $19.95 and he said UPS shipping would be $11.00. I said "What, the thing only weights a few ounces and the post office would charge practically nothing to ship it." This person, Dave, said "Yeah you are right. The post office is not far from here, I can bring it there." To keep it short, he did, and the charge was four dollars and change. How many hydro dealers do you know who would do that? Dave, you are a true southern gentleman!

My plan was to use an old green plastic drawer that I found in the basement as a tray, and cut a cover from particle board to fit a large pot to grow tomatoes, cucumbers or eggplant.

Next, to make the design more flexible, I cut two more covers so that the same tray can also be used for six four inch pots, or two six inch pots. To complete the system I use a five gallon bucket from Lowe's for a reservoir, or I can simply use a T fitting to feed the system from either of my two existing reservoirs. And, as you can see in the bottom photo the whole system nests nicely for storage.

Other than the smart valve, and the three dollars I spent for particle, board the entire system cost me nothing. All of the pots and paint were already on hand, and if they were not, their value is negligible.

If the AutoPot folks decide to steal my ideas, hopefully, they will toss a few bucks my way to compensate me for spending the afternoon improving their product.

If you are interested in experimenting with building your own AutoPot system and would like to just purchase the valve, call 512-444-2100 and ask for Dave.

Other than the valve you just need a shallow tray about 4" deep, some pots, and your imagination.

Constant dripping wears away the stone, but not this stone!

Several months ago someone began posting comments on my blog that were completely in oriental pictograms. Not being able to read them, I did not bother with them, thinking that they may be from a manufacturer of LED lighting using my blog as a promotion for LED lighting. Each comment included a long line of dots, and one day I discovered that the line actually contained links to several different sites.

First, I entered reports to blogger.com each time a comment was posted. Although they have policies against this type of activity; they apparently could care less. So much for corporate morals.

Second, I changed my comment settings to require that all comments had to be approved by me, and, persons wishing to comment have to enter scrambled letters in a box to submit a comment. I thought that perhaps the comments were being posted by an automated system.

Not so. The comments continue each time a new post is entered, and each time I reject them. Today's comment had a line in English which read: Constant dripping wears away the stone. I interpret that to mean that at some point I will get tired of rejecting this filth and let it pass. Again, not so.

Today I changed my settings to allow comments from only team members. As I am the only team member, the end result will be that there will be no comments. And that is sad, as I enjoyed the few comments that I did receive, and I took time to answer each and every one of them.

So thanks you perverted little misfit for taking some of the pleasure out of blogging and exchanging information with folks with a similar interest. And, I imagine that you are really looking forward to the day when your daughter can join your team, if she is not already on board!