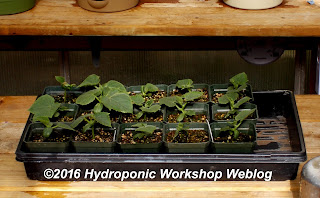 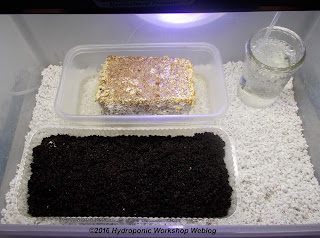 Today I put together a fruiting chamber for the mushrooms.  It is simply a container with moist perlite on the bottom.  There is a glass jar with water in it and an airstone being fed by an aquarium pump.  The objective is to keep the humidity above 90% and the temperature in the mid 70s F.  For lighting I will be using a 6500K grow light, plus a blue LED grow light with a photoperiod of 16 hours. 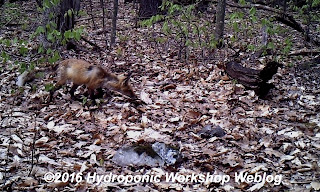 The coyote continues to visit the trail camera on a regular basis now.  I don't know when it sleeps, as it is photographed late at night and during the day.

It has some competition in so far as a Fisher, also called by some a Fisher Cat, also drops by.  The Fisher. a member of the Martin family does not take fish, and is not a cat.  The Fisher has no enemies other than humans, so it goes about its business with a confident John Wayne swagger. 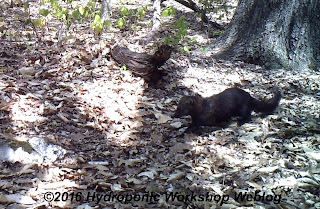 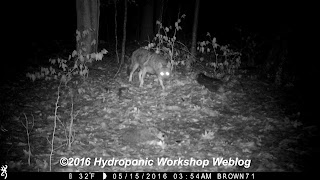 Now that I know these critters are hanging around the trail camera I never go there anymore without my friend Sam Colt.  There are several of them that the camera has captured, with this one being the largest so far.  It is plainly as large as a German Shepard, but I doubt it will come wagging its tail to lick hour hand.
Posted by Jack Bulmer at 4:33 PM 2 comments: 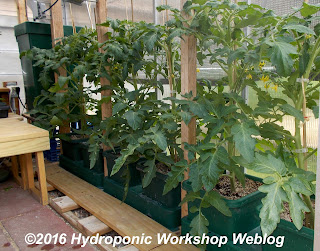 The tomatoes in the greenhouse are flowering and setting fruit, so they are taking in a lot of water.  Today I connected the waterlines to the large tank to automate the watering process.

Also, I planted the garden tomatoes, only this year I have covered the soil with black plastic to control weeds and retain warmth and moisture.  Can't wait to see how this works! 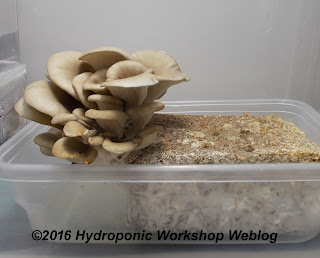 The first bloom of oyster mushrooms will be just about ready to pick in another day or so. 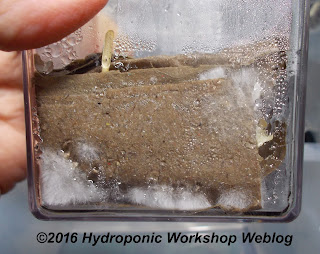 In just this short period of time mycelium is forming on the sterilized corrugated that I placed in the tissue culture vessel.  The book I received from the library says that as long as it is white, everything is OK, any other color and it is contaminated.  Sterilize, sterilize, and sterilize some more.

I read that mycelium will continue to form as long as it has cellulose to consume, so I intend to transfer some of this batch to another vessel with sterilized corrugated and try to keep the process going. 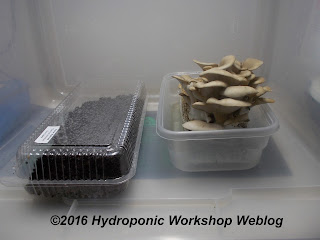 The inoculated grain I purchased on eBay has been placed in used coffee grounds that I sterilized and vacuum sealed.  For the fruiting stage I am simply using a pastry container from the supermarket. 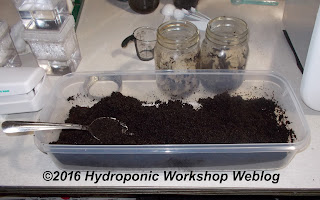 When we went for ice cream last night we asked the girl at the counter for used coffee grounds, so I have another batch to process.  At this rate the mushrooms will cost practically nothing at all to grow.

If this process works, no one will be more amazed than me! 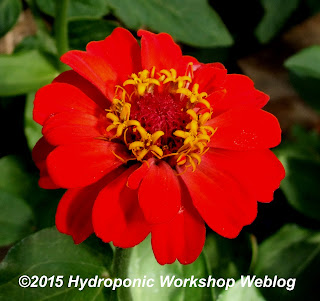 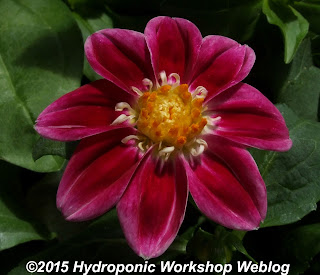 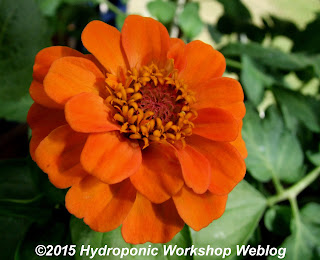 The annuals were placed in the ground yesterday, but they had already begun to bloom while still in the greenhouse.  It was so nice to see flowers after the long winter, that I could not resist urge to take a few photos.  From top to bottom: Zinnia Pulcino, Dwarf Dahlia and just a plain old Zinnia. 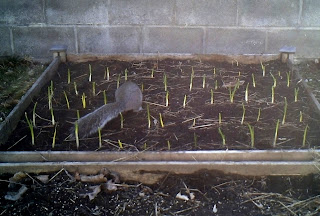 Needless to say it is frustrating to wake up each morning to find your garden dug up after you  have put so much effort into planting it.  The trail camera was put to use to find out just who the culprits were, and to no surprise it was squirrels.  I like animals as much as the next person, however, these critters are destructive and persistent; there is just no discouraging them. 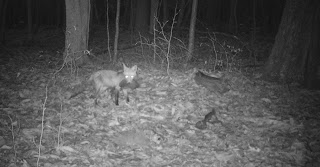 The fox family has kits to feed, so I am sure that they appreciated having the squirrels drop by for dinner. There has been no further damage since the culprits had their unfortunate accident while digging. 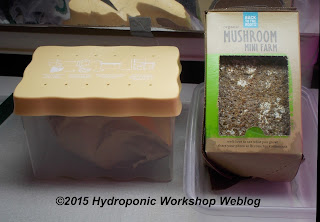 Last week while shopping at Home Depot my wife tossed a kit to grow mushrooms into the cart.  She says she has always wanted to try to grow mushrooms, so what the heck?  So far, the kit, seen on the right, has done nothing at all.  After doing some research online I decided to give growing them without a kit a try, so I purchased some mushrooms at the supermarket.

We watched a two part video on YouTube about growing them in used coffee grounds.  It said coffee shops will be glad to give  you their used grounds, and sure enough all  you have to do is ask.  They even provided the bags for God's sake!

The  video guy went through a lot of hoopla about getting mycelium to form on mushroom pieces on corrugated that he has supposedly pasteurized with hot water.  Yeah!

This person was stressing keeping a sterile environment, while rubbing his hands on everything and flopping things around on a table. Yeah sure!

This I could not believe: At the end of the second video there is a notice printed on top of the frame that says the process got contaminated and did not work.  Why the hell did he leave the whole video online?  No wonder it got contaminated the way he was tossing stuff around.

Anyway, I have no idea of whether this is going to work, but I decided to give it a try using the sterilization methods used in plant tissue culture. 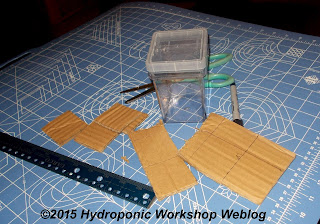 Corrugated cardboard was cut into squares to fit a tissue culture vessel. 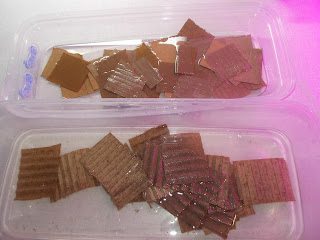 The pieces were soaked in water and the corrugated separated from the paper backing. 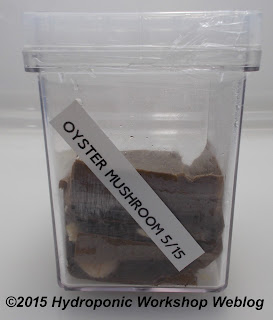 After sterilizing  the corrugated, containers and utensils under pressure, I placed small pieces of mushroom into a vessel between alternate layers of corrugated.  All of the above processes were carried out under a sterile hood. 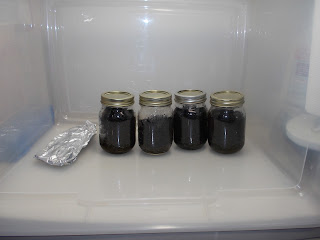 The used coffee grounds have been sterilized and vacuum sealed to prevent contamination.  If, and when, mycelium forms on the mushroom pieces, I will place them into the coffee grounds, in a container sterilized with alcohol. 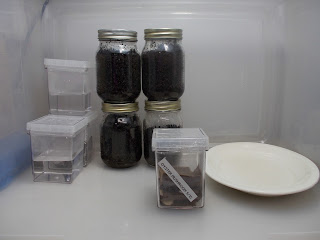 All parts of this experiment are being kept under cover, as sterile as possible, while waiting to see if  mycelium forms on the mushroom pieces.  I have no idea at all if this is going to work, but it should be interesting.

It would be nice if it did work, as mushrooms grow quickly, and once you have them going you can keep an endless supply coming along.
Posted by Jack Bulmer at 6:53 PM No comments: